theTodayPostsMagazine
Home LIFESTYLE There is something more astonishing than Conor McGregor: his collection of cars 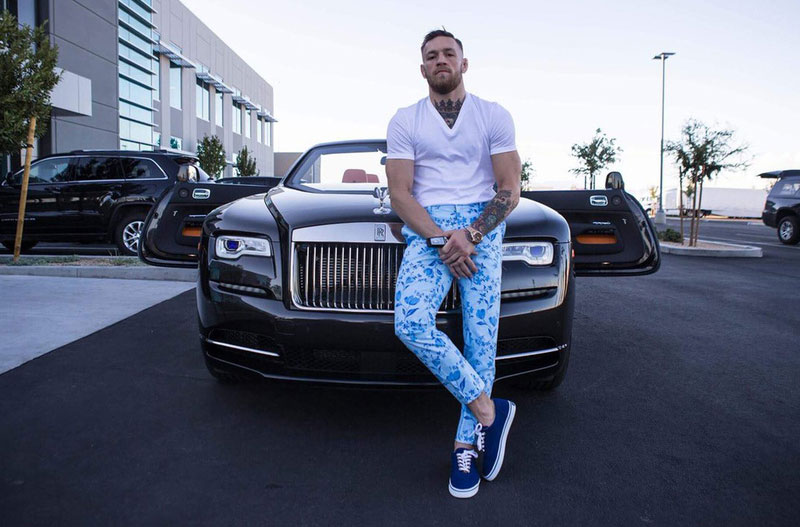 Pimp and, at the same time, style icon. This is Conor McGregor, the Irishman who has revolutionized the UFC (Ultimate Fighting Championship) with his continuous bravado and proclaiming himself champion in two categories: Featherweight and Lightweight.

Although his attempt to make the jump to professional boxing last year was stopped by Floyd Mayweather with a K.O. and his most recent fight, just three weeks ago, against the Russian Khabib Nurmagomedov proved disappointing, where McGregor seems to have no rival is in his impressive collection of cars.

Pieces that, like him, move between “macarrismo” and sophistication. Then we review the most striking.


McGregor seems to project three fundamental characteristics of his personality into three qualities of this super sports car: he is loud, brazen, and loves to attract attention.

The white Aventador offers a style typical of the Italian brand, typically exaggerated, with a carbon fiber monocoque chassis and a naturally aspirated 6.5-liter V12 mounted behind the driver’s seat. With 690 horsepower and removable roof, the Aventador Roadster is only comparable to the personality of the Irish fighter and fits with it perfectly. It has a price of R6,736,720.

We are facing the successful continuation of the Gallardo model of the Italian brand, driven by an evolution of the same 5.2-liter V10 that beat in its predecessor. The Hurricane moves in a range of power between the 560 horses offered by the rear-drive variant and the 631 horses of the Performante Hurricane. But, in addition, the special edition Hurricane Avio is the first limited edition of the Hurricane model available and it is precisely to which the McGregor car belongs. It is inspired by aeronautics and only consists of 250 units. Accelerates from 0 to 100 kilometers in 3.2 seconds and reaches a maximum of 325 km / h. Its price is R3,639,430.

It is the first production model of the British brand from F1. Its commercialization was a renaissance for the company, which since then has seen how the P1, the 675LT, the 570S and the 720S have become some of the most desired super sports in the world. At the wheel of 12C McGregor was caught driving in his home country, Ireland, where the police stopped him by driving a racing car. Powered by a 3.8-liter dual-turbo V8 engine, the 12C generates 592 horsepower and sends it to the rear wheels through a 7-speed dual-clutch gearbox. Price: R3,936,460.

We now face a model that embodies the class, driven by a V12 double-turbo engine of 6.6 liters that develops 562 horsepower. In general, it turns out to be an elegant but discreet car, although in the case of the one belonging to McGregor, it is covered with a giant vinyl of the face of its famous owner and his name of fighter, ‘Notorious’. He tuned his R-R Ghost just before his fight against Eddie Alvarez in 2016, at Madison Square Garden. Of course, it does not seem like the most orthodox way to decorate a Rolls-Royce, but at McGregor nothing is usually conventional. Before the vinyl has a price of R5,031,750.

One of Rolls-Royce’s most popular slogans is “The world needs icons” and, without a doubt, Conor McGregor has become an icon in its own right. The prestigious British car brand imagines this spectacular car for “those whose presence has the power to inspire greatness, those who are heard, but do not need approval.” So this sedan, which exceeds five meters in length, certainly fits in with McGregor. It has a 12-cylinder engine, 6.75 liters and double turbo that delivers 571 HP of power. Its price is R7,908,500.

We now face a model that embodies the class, driven by a V12 double-turbo engine of 6.6 liters that develops 562 horsepower. In general, it turns out to be an elegant but discreet car, although in the case of the one belonging to McGregor, it is covered with a giant vinyl of the face of its famous owner and his name of fighter, ‘Notorious’. He tuned his R-R Ghost just before his fight against Eddie Alvarez in 2016, at Madison Square Garden. Of course, it does not seem like the most orthodox way to decorate a Rolls-Royce, but at McGregor nothing is usually conventional. Before the vinyl has a price of R5,031,660.

Like its owner, this impressive SUV has ambition on a large scale. With its rugged design, innovative technology and craftsmanship raised to a greater degree, the Cadillac Escalade is apt to carry an ego the size of Conor. The star of the UFC posed in his new Cadillac Escalade describing it as a new acquisition for his fleet.

This SUV is full of sophistication, strength and refined style from all angles. It can easily accommodate up to eight passengers and has a 16-speaker entertainment system with Centerpoint technology for clear sound. It also has acoustic front glass, doors with triple sealing and an active noise cancellation system that make this Escalade the quietest in history. Price R2,071,640.

Although it might seem, Conor McGregor will not star in Marty McFly in the remake of ‘Back to the Future’. Of course, at the time published through his social networks several photos touring Manhattan aboard a DeLorean DMC 12 with blue lighting to make the scene gain intensity. The Delorean DMC 12, which became world famous for its role as a time machine in the classic series of films starring Michael J. Fox, was unique in making use of the paintless stainless steel body. It is also characterized by its gullwing gate. It was manufactured between 1981 and 1982 and in 2008 it was re-marketed until today. The Delorean is powered by a 6-cylinder V-PRV engine and its price is R1,198,760.

It is true that McGregor does not look like the kind of person concerned about achieving a greener environment and less taking into account the “sponge” fuel models that make up his collection. Well, interestingly, among its fleet also counts a hybrid BMW i8. Of course, the fact that it offers a performance worthy of competing with the Porsche 911 is enough reason to own one, on the scale of values ​​of Conor. And is that a hybrid sports car with 369 horses is worth a relaxing time to recharge the battery. It has a price of R2,649,020.