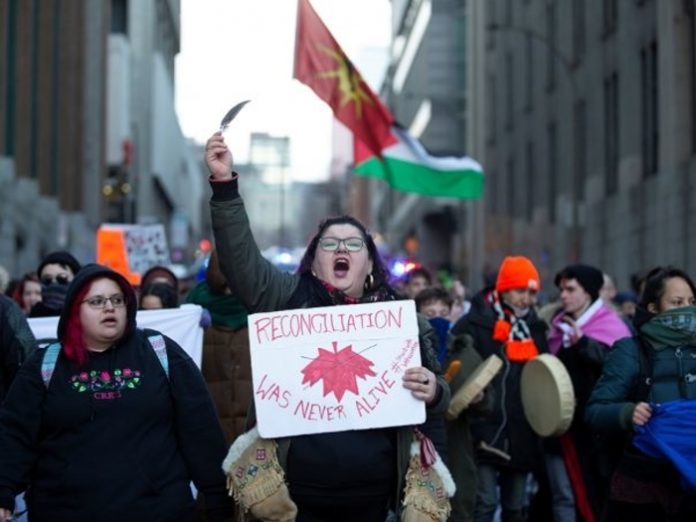 Those were the words emblazoned on a mock Canadian flag that went up in flames atop a bonfire blocking the Morice River Service Road, 66 kilometres into the bush from Highway 16, just west of Houston, B.C., at a place in Wet’suwet’en country that has come to be called the Unis’tot’en camp. It was Monday, Feb. 10.

For four days running, the RCMP had been making arrests at checkpoints and camps along the road in aid of enforcing an injunction aimed at allowing access to crews working on the right of way for the disputed Coastal GasLink pipeline, which is intended to carry natural gas from the Treaty 8 territory in the Peace River country to a massive new refinery near the town of Kitimat in Haisla territory on the coast.

The pipeline’s transit through the 22,000-square-kilometre traditional territory of the Wet’suwet’en people is opposed by most of the nation’s hereditary chiefs, but the project is supported to one extent or another by the elected Wet’suwet’en councils, and by all the other First Nation communities from Dawson Creek, east of the Rockies, to the Pacific Ocean. The $40-billion megaproject promises construction work for 10,000 people and as many as 950 full-time permanent jobs, and it comes with a variety of job training and benefits packages for the First Nations communities along the route.

Nevertheless, the call that went out from the Unis’tot’en camp on Feb. 10 was clear and plain. The declaration: Reconciliation is dead. The admonition: Shut down Canada. Circulated and broadcast and replicated on placards and in hashtags and headlines, it was all very melodramatic, and there have been freight train blockades and sit-ins and commuter-rail blockades and highway blockades and on and on, all across the country. Splendid.

At the moment, things have gone a bit quiet while a hastily concluded, confidential and tangentially related concordat between Ottawa, Victoria and the dissenting hereditary chiefs is put to the Wet’suwet’en people for their consideration. So it’s worth taking the opportunity of the interregnum to ask a question or two, in light of all this:

There’s really no point in asking whether this vaguely comprehended public good is alive or dead if reconciliation means anything you might want it to mean. If that’s the way things are going to be, the term can be weaponized for any old rhetorical purpose you like. Fat lot of good that will do anyone.

But the term does have what you might call objective meaning. The Concise Oxford Dictionary has “reconcile” as “make friendly after estrangement,” which has a nice ring to it, as do its subsidiary meanings. To purify, by special service after profanation or desecration. To make acquiescent or contentedly submissive. To heal, to settle, to harmonize, to make compatible. That kind of thing.

More importantly, and of direct relevance to the current unpleasantness, we have several decisions of the Supreme Court of Canada to draw upon, each of which addresses this business of reconciliation as it relates to Aboriginal rights and title. Most useful is the case of Delgamuukw Versus the Queen, which — conveniently for our purposes here — involves the hereditary chiefs of the Gitxsan and the Wet’suwet’en.

The whole point of Aboriginal rights in Canada — the whole purpose of Section 35.1 of the Constitution Act, which explicitly recognizes and affirms the Aboriginal and treaty rights of Canada’s Indigenous peoples — is “the reconciliation of the pre-existence of Aboriginal societies with the sovereignty of the Crown,” as the Supremes’ Chief Justice Antonio Lamer put it.

And reconciliation doesn’t at all mean that the will of the Wet’suwet’en hereditary chiefs must necessarily prevail over the rights of all those other First Nation communities who want the Coastal GasLink pipeline built. And whatever you or I might want, the very real and enforceable rights of those Wet’suwet’en chiefs are not inviolable.

As for consent, in all dealings where Aboriginal rights or Aboriginal title might in some way be trespassed upon, a First Nation’s fully free and informed consent should be the overriding objective of the Crown’s good-faith negotiations. That’s been the law for a quarter of a century now.

The Crown can’t outright extinguish Aboriginal rights without consent. But the Supreme Court in Delgamuukw was unambiguous: “Constitutionally recognized Aboriginal rights are not absolute and may be infringed by the federal and provincial governments,” and there are massive hurdles that the Crown has to surmount in order to infringe upon those rights. But they’re by no means insurmountable. Any infringement of Aboriginal rights and title must be constrained by a clear and valid justification. Among the justifications the Supreme Court judges in Delgamuukw identified as being available to the Crown are “the development of agriculture, forestry, mining, and hydroelectric power, the general economic development of the interior of British Columbia, protection of the environment or endangered species, the building of infrastructure and the settlement of foreign populations to support those aims.”

The whole point of Aboriginal rights and title is reconciliation, and the whole point of reconciliation is to bridge Crown sovereignty with the ancient and complex laws, customs and traditions of Indigenous communities who have persisted in what is now Canada from time out of mind. Put another way, the point is to simply muddle through. There’s nothing stirring or glamorous or especially exciting about it. As Justice Lamer put it, so succinctly and eloquently: “Let us face it, we are all here to stay.”

So do let us face it, then. The rumpus out at Kilometre 66 on the Morice River Forest Service Road has provided all kinds of thrilling opportunities to shout ourselves hoarse about how reconciliation is dead and Canada is a disgusting racist colonial settler state, or to alternatively make spectacles of ourselves yelling that reconciliation is a hustle and Aboriginal rights are “rights based on race.” Either way, it’s vulgar and stupid, it won’t get you a leg to stand on in a court of law, or a ride back into Houston from the Hagwilget Bridge, or even the price of a cup of coffee at the Two Sisters Cafe in Smithers.