theTodayPostsMagazine
Beranda Sport If he gets injured, that’s his destiny’: The five-year-old jockeys outrunning death... 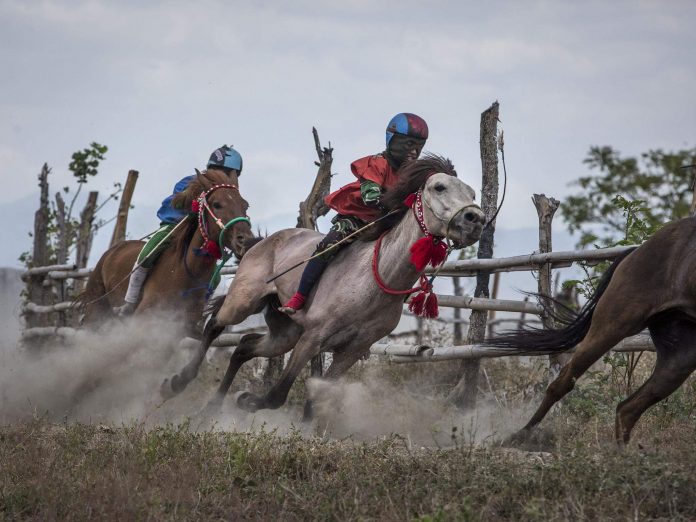 The boy mounted the horse barefoot, with only an ill-fitting Hello Kitty helmet to protect his head and a talisman under his clothing to give him the courage of his ancestors.

Firmansyah doesn’t remember hitting his head on the ramshackle wooden railings lining the racecourse or landing on his shoulder as the three horses in the trailing pack thundered past. Nor does he recall being scooped up by a police officer who sped him on a motorbike to a bare-bones clinic. He has no memory of his uncle applying herbal remedies to his wounds that night.

But when Firmansyah woke up the next morning, he declared, unconvincingly, that he “felt strong” and was “ready to race today”.

Sure enough, a few hours later, he was back at the starting gates in another preliminary round race of the Regional Police Chief’s Cup 2019, bruised but riding again.

In the city of Bima on the island of Sumbawa in Indonesia’s sprawling archipelago, the use of child jockeys in professional horse racing is part of a long-standing tradition.

And the average age is dropping, with jockeys as young as 5 bestride a horse and most 10 or younger.

Child-welfare advocates insist the practice constitutes child abuse and exploitation and should be banished.

Child labour laws in Indonesia are rarely enforced, however, and children are known to work in fireworks factories, tobacco farms and prostitution. Many here consider child jockeys contributing to their family’s income as a perfectly acceptable practice in one of Indonesia’s poorest regions.

Equestrianism is a deep-rooted part of Sumbawan culture, where children as young as four learn to ride the short, stocky horses for which the island is known.

“In the late 1990s, jockeys were usually aged from about 10 to 14 years old, but then we found the lighter jockeys to be faster, and now they are aged from about 6 to 10,” said Fahrir H M Noer, the deputy chairman of the race.

This is clearly child exploitation. The horses move so fast. The boys ride the horses with no proper protection. This is violence against children. As children, they cannot say no to their parents or whoever ordered them to ride the horse
Racing is a tradition in many families, with jockeys growing up in households where their brothers and fathers also competed as boys. Supporters of the practice say this family connection is an important difference separating Sumbawan child jockeys from those who race camels in the Persian Gulf, where there have been reports of child enslavement and trafficking.

But tradition is not a sufficient reason to continue using children in horse racing, according to Arist Merdeka Sirait, chairman of the National Commission for Child Protection, a nonprofit organisation.

He said the commission has found cases where children had been put to work by men who only posed as their fathers.

“It has become a business,” Sirait said. “This is clearly child exploitation. The horses move so fast. The boys ride the horses with no proper protection. This is violence against children. As children, they cannot say no to their parents or whoever ordered them to ride the horse.”

Child jockeys wait at the starting box (Getty)
“This practice should not be tolerated,” Sirait added. “It is a crime.”

A government official said the practice does not seem to fall afoul of existing Indonesian law banning child exploitation. “By definition, exploitation means that the children do not get anything and they are unhappy about it,” said Retno Listyarti, a commissioner at the Indonesian Child Protection Commission, a government agency. “But in this case, it seems that the kids are happy, proud, and it is even a dream.”

We buy doping medicine from Australia and online in Indonesia, and inject the horses in the morning and at night on race days to make them faster and improve their stamina
Despite the call by child advocates to outlaw the races, they show no signs of stopping, and the week of competition in Bima is a highlight of the city’s calendar. The grandstands are full of spectators on weekdays and overflowing for the weekend finals, with animated fans cheering on their favourites and waving fists full of the Indonesian rupiah they have gambled.

Though gambling is illegal in Indonesia, the police are there to stop the occasional scuffles that break out over gambling debts rather than to stop the betting.

The income the Sumbawan boys earn from a race can be meaningful to a poor family.

For each of the more than 300 races during the week, horse owners pick from a pool of about 30 child jockeys and pay them from 50,000 to 100,000 rupiah a race in the early rounds, or $3.50 to $7. As they progress to the finals, they can earn double that, with bonuses up to 1 million rupiah, or $70, in a place where the minimum monthly wage is just over twice that.

The top prize for winning the final of each category is a moped worth $1,200. Second prize is a cow worth $500. Other prizes include refrigerators and TVs.

About 20 minutes before one of Edy’s horses was due to race in an early round, his trainer funnelled a cocktail of milk, eggs, energy drink, ginger and coffee through a section of hose pipe into the horse’s mouth, with the hope the concoction would increase its speed. Most of the elixir ended up on the floor, but Edy seemed satisfied as he patted the horse.

The owner wasn’t shy about revealing some other performance enhancers he gives his steeds.

“We buy doping medicine from Australia and online in Indonesia, and inject the horses in the morning and at night on race days to make them faster and improve their stamina,” said Edy.

Most trainers also rub chili powder and stinging plants on the hindquarters to numb the horses’ muscles so they don’t feel fatigue during the race.

One of the child jockeys, Imam Dudu, 8, who dreams of becoming a policeman and who races in a SpongeBob SquarePants helmet and balaclava, goes to elementary school, but his father admits that he sometimes misses class to race.

I worry about him falling and getting hurt, but it is a tradition here on the island and in my family. Sometimes if he falls, he gets injured and sometimes not. If Allah wants him to be injured, it’s his destiny
Imam’s mother, Tiara, 36, said, “Racing horses is easy money for the family,” and she noted that paying for the schooling — and bribes — necessary to support her son’s dream of becoming a policeman will be expensive.

As they get older, the most successful jockeys go on to compete in regional races on neighbouring islands, including Lombok, a popular tourist destination, where jockeys continue racing past 14.

Asikin Bin H. Mansur, 47, is a horse trainer whose two adult sons, now 25 and 18, were jockeys. His boy Adi, 7, was competing in this year’s Police Chief’s Cup.

“I worry about him falling and getting hurt, but it is a tradition here on the island and in my family,” Asikin said. “Sometimes if he falls, he gets injured and sometimes not. If Allah wants him to be injured, it’s his destiny.”

Support free-thinking journalism and subscribe to Independent Minds
Adi, playing with friends between races, said, “I like racing and don’t get scared,” though he admitted he misses going to school when he’s away racing.

The seven-year-old qualified for a final in Bima and came in fourth, winning the owner a refrigerator.

Adi’s father seemed pleased with his son’s haul for the week, about $162. “A little less than I hoped for,” Asikin said, “but it was a gift from Allah.”

Papua protests: Indonesia cuts off internet to entire province and deploys more than 1,000...

Jason Hodge - November 4, 2019
0
Indonesia has deployed more than 1,000 soldiers and blocked internet access in Papua where unrest has swelled over authorities’ alleged mistreatment of students. Thousands of... 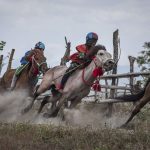 If he gets injured, that’s his destiny’: The five-year-old jockeys outrunning death to feed...

Jason Hodge - November 4, 2019
0
The boy mounted the horse barefoot, with only an ill-fitting Hello Kitty helmet to protect his head and a talisman under his clothing to...

Jason Hodge - November 4, 2019
0
If you live in Indonesia and want to earn some extra money easily, then this may be the most exciting article you'll ever read. Trusted...