How do I choose a men’s watch?

If the movement in your automatic or mechanical timepiece is built in-house by a major Swiss marque, it’ll most likely be of a better quality than one which has been mass-produced externally.

2) Check the lugs for sharp edges

If the lugs or case of your watch feature any sharp edges, the watch hasn’t been finished properly and is a wider sign of poor manufacture.

3) Make sure you can swim with it

Always opt for a watch which is – at the very least – water resistant to 50 meters. This doesn’t mean you can take your watch to a depth of 50 meters, but rather that you can swim with it normally.

Try and opt for a watch finished with scratch-resistant sapphire crystal glass. Anything less and the slightest bash will leave your watch in a very bad way indeed. 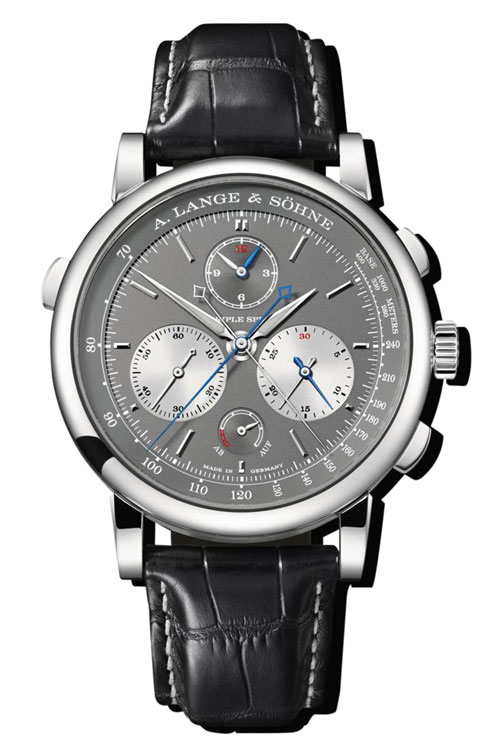 Earlier this year, a one-off steel-cased 1815 “Homage to Walter Lange” watch became the most expensive A Lange & Söhne ever sold when it was hammered down for more than $ 851.800 at Phillips Geneva. Walter Lange died in 2017 at the age of 92 having rebuilt his family firm following the reunification of Germany. Limited-edition versions are now on general sale.

Watch of the collection
The brilliant Triple Split can measure split times for seconds, minutes and hours. Its mind-bogglingly complex mechanism contains 567 components. Just 100 examples will be made and, despite the price tag, we think it’s a bargain. 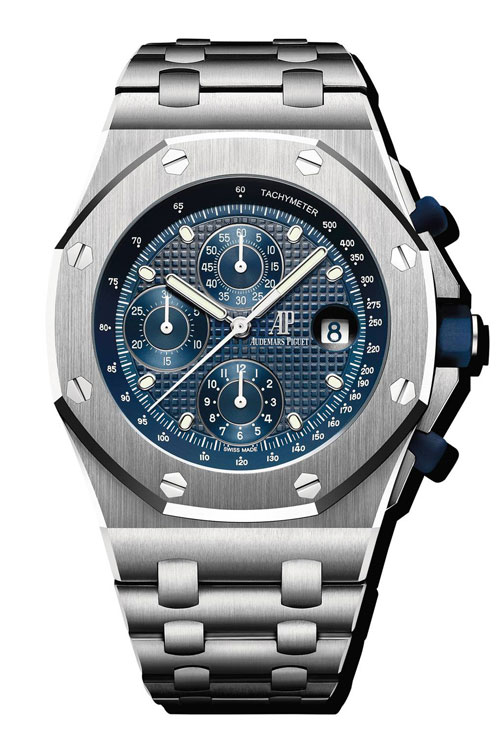 There are now 107 variations on the Royal Oak – the world’s first steel-cased luxury sports watch launched in 1972 – which account for the majority of the brand’s 40,000 or so annual sales. The mighty Oak’s success has enabled AP to sponsor top golfers, support the international arts scene and nature conservation and keep some aside for its museum in the Valleé de Joux.

Watch of the collection
In 1993, a young designer called Emmanuel Gueit was charged with upsizing the Royal Oak. The result was the 42mm “Offshore” chronograph, which is revisited in the new steel-cased Offshore that, not coincidentally, arrives exactly 25 years on. 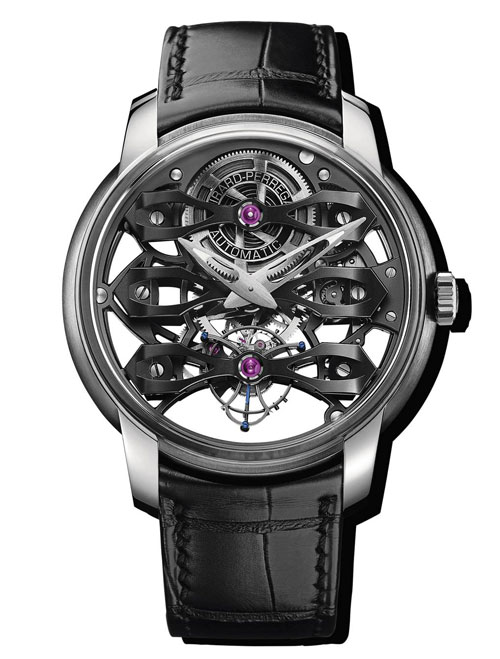 After a few years in the doldrums, Girard-Perregaux hit the ground running in 2018 with several new models based on some of its best-known designs. It gave an impressive demonstration of horological mastery in the form of its Minute Repeater Tri-Axial Tourbillon.

Watch of the collection
The Neo-Tourbillon With Three Bridges Skeleton represents an ultra-modern take on the tourbillon watch with three visible, straight, dial-side bridges that Girard-Perregaux patented in 1884. The new watch, however, features blackened and curved bridges and an extensively skeletonised movement. 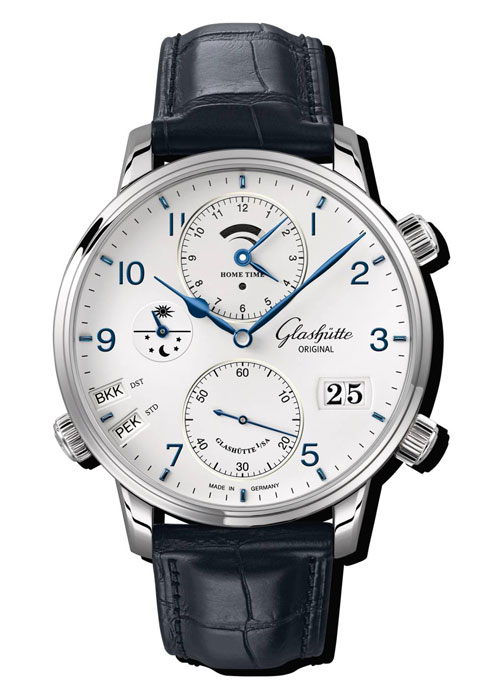 This year has heralded a blossoming of green dials. One of the best to “go green” was Glashütte, which produced a fabulous take on the theme with two envy-inspiring models in an emerald hue: the 42mm Sixties Panorama Date ($8,900) and the 39mm Sixties ($6,350).

Watch of the collection
If there’s a chance you’ll be popping to the Chatham Islands in the Pacific, secure a Senator Cosmopolite watch. This 44mm steel-cased beauty displays the time in two zones, with black, blue or red indications showing hour offsets, half-hour offsets or, as in the case of the Chatham Islands, 45-minute ones. 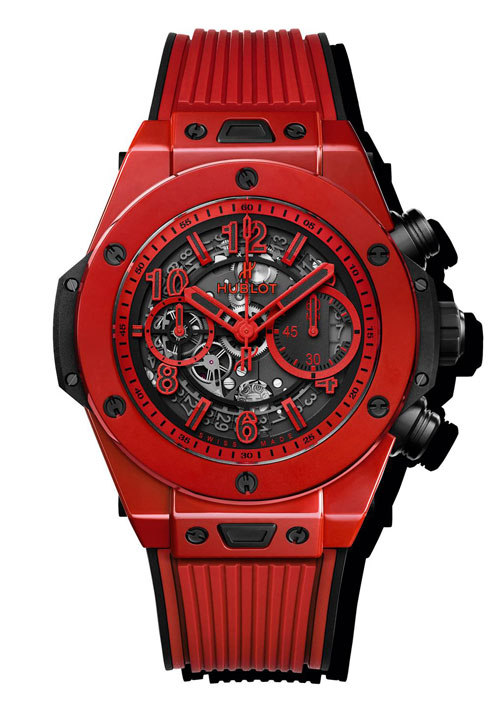 This Swiss brand played a blinder by sponsoring this year’s World Cup. Independent analysis showed massive spikes in visits to the Hublot website when play paused, while its $5,000 Big Bang Referee smartwatch proved a hit with fans keen to keep track of goals, player changes and yellow or red cards.

Watch of the collection
For something that really makes a statement – even by Hubot standards – look no further than the Big Bang Unico Red Magic, the first watch made from vibrantly coloured ceramic. Just 500 are available. 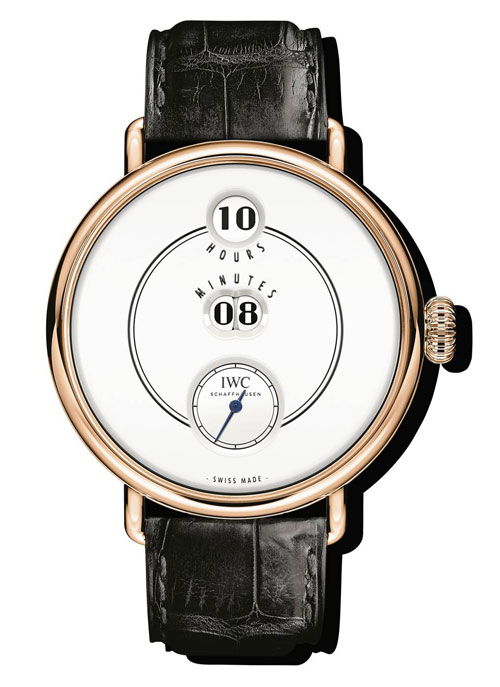 The Schaffhausen brand celebrated its sesquicentennial (look it up) in 2018 with a slew of special editions – 27, in fact. Five of them were based on the ever-popular Portugieser model, which was first introduced in 1939.

Watch of the collection
The Tribute To Pallweber editions are based on a jumping-hour pocket watch produced in 1884. Instead of a conventional time display, they use a system of rotating, numbered discs that show the hours and minutes through large windows, while seconds are taken care of by an indicator at the six o’clock position. They are available in editions of 25 in platinum, 250 in red gold and 500 in steel. 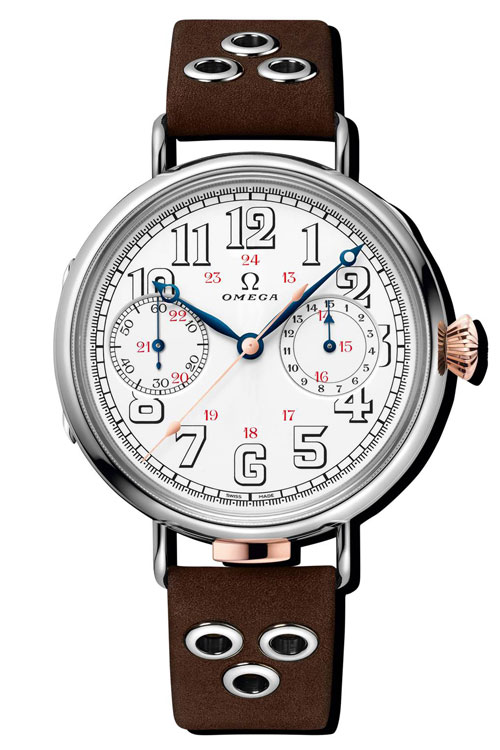 Omega’s new takes on its trusty Speedmaster include the black ceramic Dark Side Of The Moon, a tribute to Apollo 8. There’s also a reincarnation of the 1959 Speedmaster CK2998 in an edition of 2,998, each with a white dial and black counters, a pulsometer bezel and a classic 39.7mm case with a manually wound movement.

Watch of the collection
Omega’s Wrist-Chronographs were made using 105-year-old movements. The 47.5mm white-gold case has a flip-open “hunter back” behind which the movement can be seen through a sapphire crystal cover. The dial is coated in white enamel and fitted with blued-steel hands. 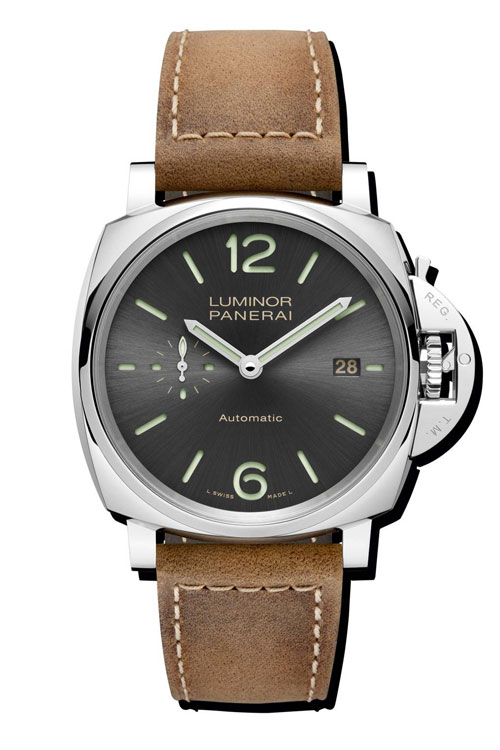 Panerai’s enthusiasm for sailing extends to awarding the annual Panerai Challenger Trophy to an “outstanding young person” who has overcome physical, economic or social challenges in order to achieve a milestone in sailing or windsurfing. This year’s trophy went to 18-year-old Nicola Stockdale, a volunteer sailing instructor from Manchester.

Watch of the collection
The new Luminor Due aims to make Panerai’s crown guard watch more accessible and wearable with a range of cases in 38mm, 42mm and 45mm. The 42mm, 3 Days Automatic in steel with black dial and soft brown strap would be our choice. 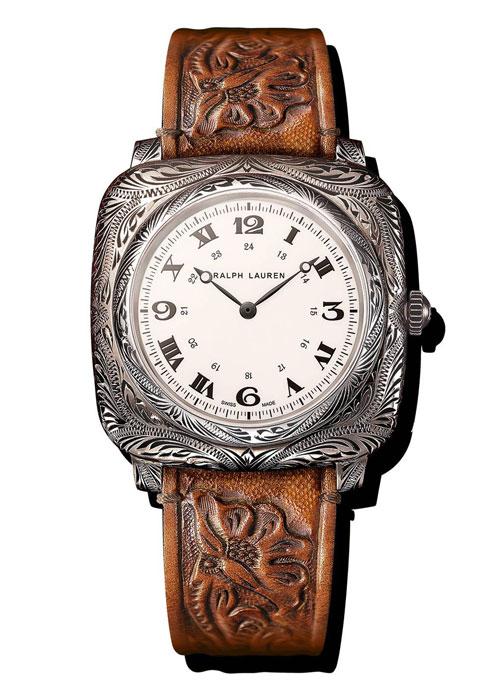 Following a fallow period in the decade-long history of Ralph Lauren’s watch line, the collection has been given a serious fillip with the introduction of a range of models to commemorate the all-American brand’s 50th anniversary.

Watch of the collection
Dubbed “The American Western Watch Collection”, the line-up features round and cushion-shaped cases, regular or skeleton dials and a pair of hand-wound pocket watches. RL’s love of cowboy culture is expressed in the thick leather strap that’s hand-tooled in Texas and “burnished in Italy”. Yeeeee-haaaaa! 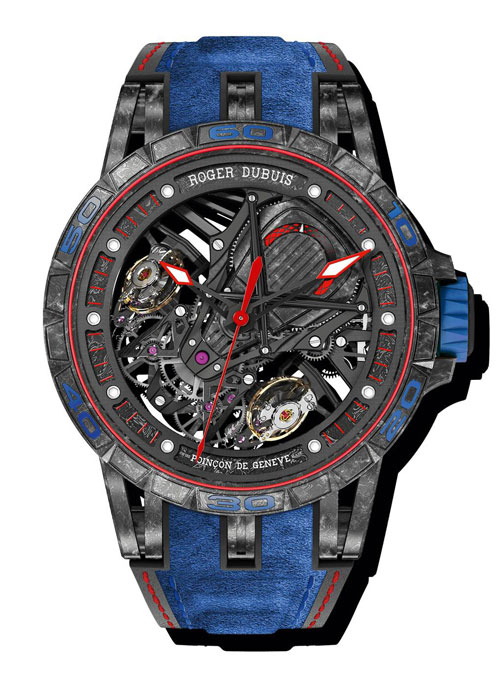 As carmaker/watchmaker partnerships go, the five-year link-up between Lamborghini and Roger Dubuis is a match made in heaven for those willing to spend more on a watch than an “entry-level” Lambo.

Watch of the collection
The Excalibur Aventador S Edition is powered by the special RD103SQ hand-wound movement with “jumping” seconds that’s been especially designed for the Lamborghini models. The 45mm case is made from the same carbon composite used by the carmaker, while the bridges that hold the mechanism in place are based on engine bay cross struts. Vrooooom… 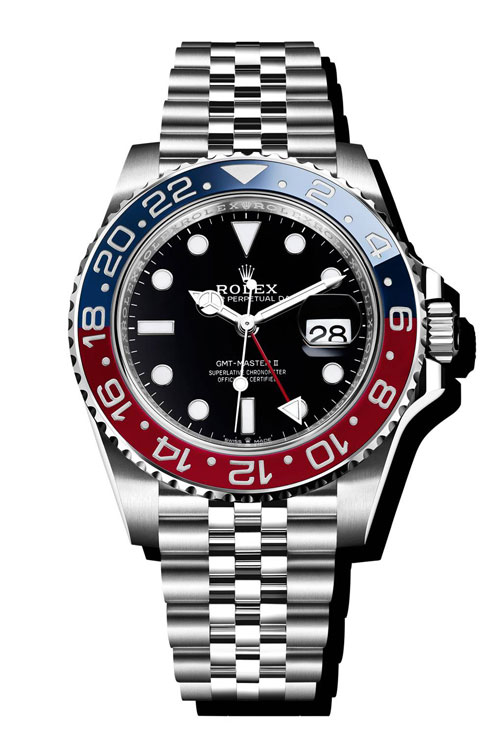 The annual reveal of new Rolex models is always a feast for the eyes – but this year we got a bit more than we bargained for, with the unexpected arrival of a new Cosmograph Daytona “Rainbow” in Everose gold, with its 56 brilliant-cut diamonds embedded into the case – suddenly, $89,990 doesn’t seem such a stretch.

Watch of the collection
Unquestionably it’s the stainless-steel “Pepsi” GMT-Master II that Rolex has finally released. The famous red-and-blue bezel vanished in 2005 and was absent for almost ten years before returning in a new Cerachrom execution, but only in white gold. These are now proving almost impossible to get hold of at the “RRP”. 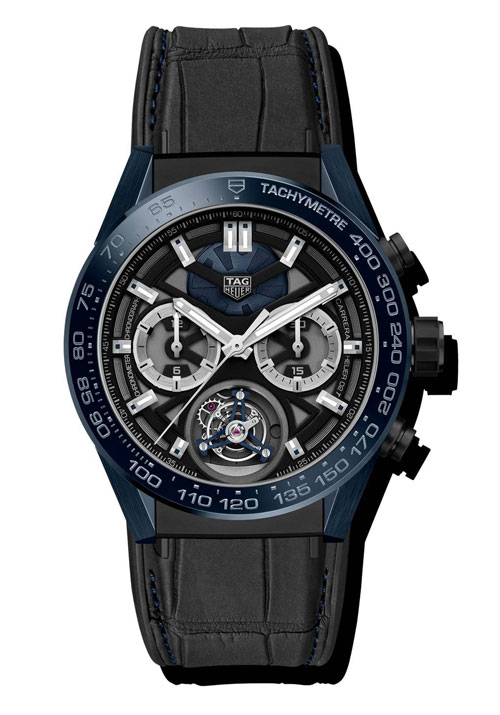 It’s not easy to make a success of pairing car companies with watch brands, but one that’s clicked is the recent marriage of TAG Heuer and Aston Martin. The first TAG/Aston watches include a $1,650 Aston Martin Racing quartz model and a $6,750 Carrera chronograph.

Watch of the collection
The 55th anniversary of the lynchpin Carrera prompts the launch of a tourbillon chronograph version, which comes with a “Viper Head” chronometry certificate from the Besançon Observatory. Featuring a dark-blue ceramic case with matching bezel and blue-tinted movement components, it will be produced in just 155 examples.